The Sheep and Goat Industries Launch a Collaborative Project For Improving and Integrating Genetic Improvement Services in Canada.

CGS wants to ensure that all members are aware of this change in policy at CFIA with regard to Scrapie regulations.

This a very serious matter regarding the importation of new genetics to Canada and expanding and refreshing genetic bases. We are in definite action on this topic and will not relent!

The release below is from CNGF. Yes, this is firstly an animal health issue but it has significant ramifications for genetic diversity and progress. Onward to find solutions!

Last week CNGF was made aware that Option 2C for the import of male small ruminants from any premises in the USA, which requires the importing premises to be enrolled in the Scrapie flock certification program (SFCP), was under review by CFIA and has been put on hold until further notice.
(Requirements for Small Ruminants Imported From the United States for Breeding, Domestic or Captive Purposes-TAHD-DSAT-IE-2007-5-6)

CNGF has contacted Scrapie Canada and is currently seeking further information. According to Scrapie Canada, “the issue stems from instances where animals are imported under Option 2C and importers subsequently left the SFCP, were removed from the program due to non-compliance or sold imported animals without necessary permits. Scrapie Canada has met its obligation to report such instances to the CFIA, which has left the CFIA having to conduct post-import follow-up. This is a significant grey area between import requirements and program requirements, one that is now under review.”

Scrapie Canada is concerned that this decision was made unilaterally and without industry consultation and have contacted: CFIA’s Senior Veterinary Office, the Senior Staff Veterinarian of the Domestic Disease Control Section and the Director General of the Animal Health Directorate.

Individuals who have questions have been directed by CFIA to contact their local animal health district office: https://inspection.canada.ca/about-cfia/contact-us/eng/1546627816321/1546627838025

CNGF is continuing to investigate and plans to be involved in the review process to identify additional import opportunities.

The Goat Genetic Improvement Webinar Series was held on July 20th to 29th, as part of a webinar series presented by the Ontario Ministry of Agriculture, Food and Rural Affairs. Below are the supporting materials included.

Scrapie and Goat Genetics in Canada

Heritage Livestock Canada in partnership with the Canadian Goat Society and the Animal Genetics Resource Centre (AnGRC) are undertaking a project to establish the genetic diversity of registered purebreds, within the following breeds : Angora, Oberhasli, Toggenburg, Nubian, Alpine, Saanen, LaMancha and Nigerian Dwarf.
Producers are asked to collect hair samples from differing dam lines within their herds (for example a dam line, not dam/daughter). The study will be used by HLC to focus on specific breeds and by CGS to gain valuable, fact based information on genetic diversity within our breeds as genomic testing of goats expands.
Samples may be sent to:
Rebecca Lange: Angora, LaMancha
Callum McLeod: Nubian/Saanen/Toggenburg
Sandy Howell: Alpine/Oberhasli/Nigerian Dwarf
If there are any specific questions, please direct those to Rebecca Lange.
Contact information
Sandy and Callum: https://www.goats.ca/board-staff
Rebecca: heritagelivestock.net/contact 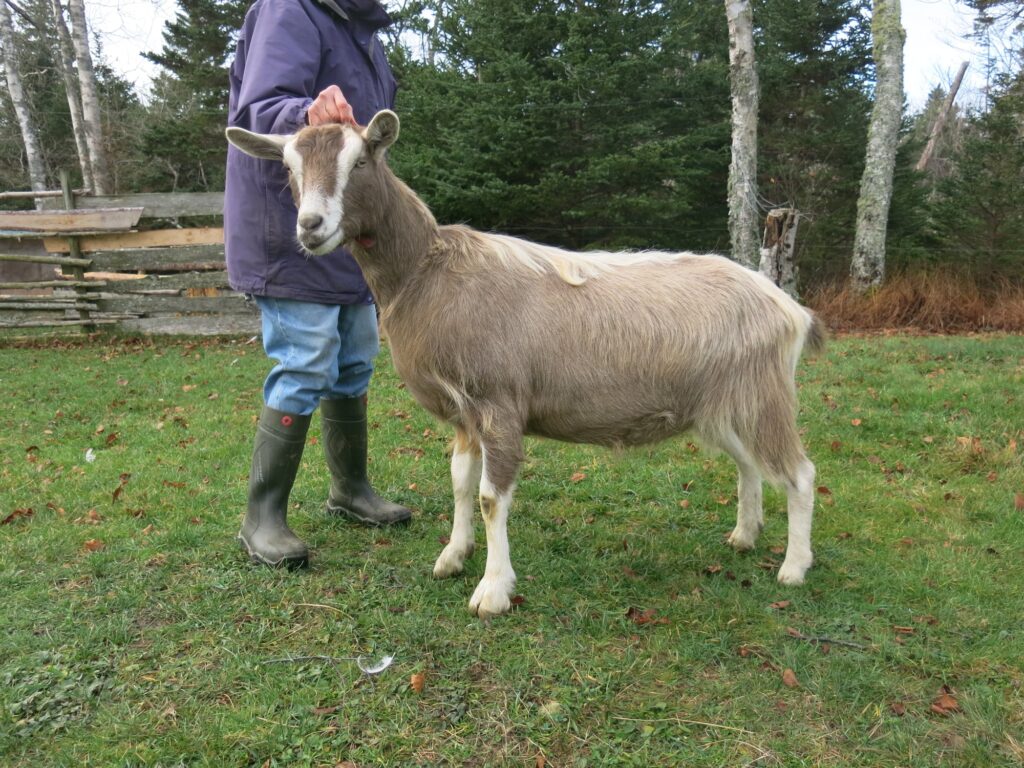 Recently the Ontario Ministry of Agriculture, Food and Rural Affairs sponsored a series of four webinars on goat topics with a particular emphasis on genetic improvement.

CGS will eventually have access to recordings of these webinars.

Herewith we present copies of two presentations that were presented in one of the four webinars.

The presenters in this webinar were Brian Sullivan, Manager of the Canadian Center for Swine Improvement (CCSI) and Callum McLeod, CGS Director. CCSI is responsible for working with CCSI to manage genetic evaluations for dairy goats in Canada.

Both of these people went to a lot of work to create their presentations.

Please enjoy and profit from studying these presentations and if you have questions or comments please direct them to National directors of CGS or the CGS office.

We’ll let you know when the recordings are accessible!