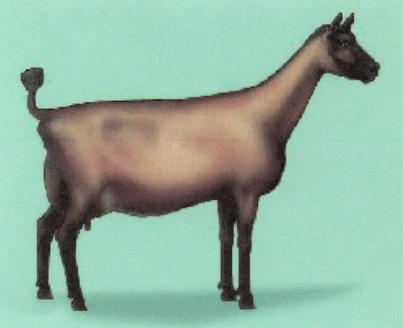 The Oberhasli, the most recent herdbook to join the CGS registry, had been classed with the Alpine for many years until American breeders undertook to separate out the animals previously called “Swiss Alpines”. There were four types of alpines under the same ADGA herdbook with separate herdbooks kept for each: the Rock, British, Swiss and French.

Oberhasli are strikingly coloured; the does may be red-bay as illustrated or pure black, but bucks must have the red “chamoisé” colouring. No significant amount of white is allowed in the coat. Ears are upright, the face dished or straight.